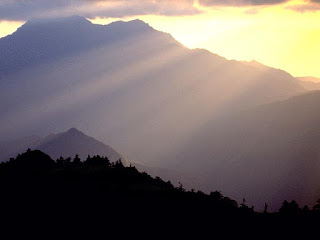 The NEW DAY Blessing
Y’varekh’kha ADONAI v’yishmerekha.
[May ADONAI bless you and keep you.]
Ya’er ADONAI panav eleikha vichunekka.
[May ADONAI make his face shine on you and show you his favor.]
Yissa ADONAI panav eleikha v’yasem l’kha shalom.
[May ADONAI lift up his face toward you and give you peace.]’
~ Numbers 6:24-26
I love when my Dad comes to visit us.  Many of you know that my Mother passed away unexpectedly just over one year ago.  So when my Dad comes for a visit, it’s always a treat to see how the LORD is moving in his life.
Often, I find myself entertaining questions such as Will he be ok?  Will he stray from Truth in the midst of his great heartache?  LORD forbid!  Who will come alongside him to encourage him in those dark moments?  Are his nights often almost unbearable…still?  Will he have clean underwear?
…You know, the usual questions anyone would ask when the GREATEST TREASURE in the curvaceous form of a help-meet has been removed from a man’s life.
After the (sometimes controlled) chaos of the screeches, yelps and occasional arguments of his GRANDchildren (those would be my four) have calmed down – usually as I clean up the kitchen and they’re off on their next excursion in the playroom! – my Dad and I are afforded the luxury of some much needed contemplative thoughts on God’s Word.
Of course, the theme this time was the New Year.  Now, I’m very thankful that ADONAI has given us all the gift of a new one, indeed!  However, I am often left with the innate feeling that New Year’s Resolutions may not be all that helpful afterall…
I mean, it is a few days past the New Year and my hopes of a smaller behind in 2009 haven’t even begun to take shape.  I guess my resolve is a little weak.  Must be the extra cookies…
How are you doing with any of your resolute ideas for a better you in 2009?
I suppose I have been wondering what would happen if we resolved to shift the focus from MY RESOLUTIONS to HIS REVELATIONS.
As my Dad and I were talking, the words

just spilled from my mouth.
I suppose in all these restless musings I began to see that MY RESOLUTIONS begins with ME as the focal point…but HIS REVELATIONS have to begin with HIM.
ADONAI then will be my Precious Treasure and Focal Point by His own unique graces!
Scripture tells us that our inner man is being renewed day by day (2 Corinthians 4:16).  So then, is it really wise to take on a WHOLE YEAR of resolutions with me at its center?
Anytime I begin with ME, that’ll not end up quite like I see it in my mind’s eye.
What is it that I seek in this New Year?  Am I seeking a new and improved me?  Or am I seeking FIRST His Kingdom?
Which is it?  Who or what holds my eye?
Hmmm….
In all His infinite wisdom, He reveals to us that as we BEGIN each day seeking HIS KINGDOM, He will then add everything else.

But seek first his Kingdom and his righteousness, and all these things will be given to you as well. Don’t worry about tomorrow — tomorrow will worry about itself! Today has enough tsuris (troubles) already! ~ Matthew 6:33-34

Tsuris! indeed is the exorbitant price for seeking first anything other than The Kingdom.
You suppose that is where we often mess up…at the very starting point?
Where are your eyes at the start of this NEW DAY?
One of the most glorious things about the SWEET GRACES of ADONAI is that He never commands anything of us that He doesn’t first equip us with wisdom, power, and knowledge that we may succeed.
As St. Augustine said, ‘LORD, command what Thy will and give what Thy command!’
Chaverim! (Hebrew for Friends)…the thing you look upon the longest is the thing you will begin to worship.
What is that thing for you?
What or Whom will it be for you…for today?
The Prayer

“Precious Christ, I come with a large request for 1842: it is that You would be the “Alpha and Omega” of it. Do You not say, “Ask what I shall give you?” Yourself, Lord! You have most blessedly given Yourself to me. But I find sweet liberty to entreat more unfolding, revealing, and opening of Your glorious person, amazing work, and matchless love, than I have yet had; and more losing and treading down of SELF, too–that I may be lost in Your fullness, and forgotten and forsaken in Your soul-absorbing glories. Oh! raise me higher, draw me nearer, that I may daily die, and You live in me more manifestly. I just give myself to You, to live on You, to live in You, to live for You, more and more than heretofore, and that by the power of the Spirit resting on me. I humbly ask that mine may be a large and still-increasing portion; that, under fresh anointings, You, most lovely Jesus, may be more fully known, more loved, more served; for it is to You the Holy Spirit leads, of You He testifies.
Oh, do make this a large, rich, full year! You being increasingly honored in me, and I increasingly lost in You, and made an increasing blessing to Your dear people. An Ebenezer for past mercies befits me; large and magnificent have been Your bestowments; bountiful and constant Your favors to me–a poor worthless nothing! “Bless the Lord, O my soul–and all that is within me, bless His holy name!”
~ Ruth Bryan (1842)