Are You Possessing Your Promised Land? – Week 3

Suffering According to What – Sin or Sifting?

Let’s talk about long-suffering.  Now, don’t click away just yet!  This is certainly not a topic we Followers rush to the table for fun-lovin’ discussion over hot cocoa, is it?  Some of us won’t touch the topic with a ten foot pole for fear that we’ll somehow inherit its unpalatable properties!

Nevertheless, many of us at one time or another will find ourselves teetering on the precipice of hopelessness, despair and depression.  Then what?

TODAY’s Word is for you…

Let me say this is simply a general look at what Scripture has to say specifically about suffering.  Though suffering comes in many forms, The WORD – Who IS Christ – is Sovereign over all of them.

Today, we’re going to look at the depressed state of the mind.

Typically, one who understands this very complex realm of depression to some degree, is one who firsthand, is familiar with its dark depths.  It is very easy for well-meaning Saints to offer the regular ‘Just snap out of it!’ advice – with Scripture to boot – just as Job’s (non)helpful friends did.  Surely, they meant well.  And if you, dear Friend, have found yourself on the receiving end of this advice, be merciful and forgiving.  You cannot expect them to know the depths of your suffering.  And also, take hold of HOPE in that ‘the LORD restored Job’s losses…HE turned his captivity…as he prayed for his friends...” (Job 42:10).

So, TODAY I want to offer a brief Word to those who find themselves in a seemingly forever state of despair.  Just for today…because for those who have been held in the clutches of despair for any length of time, TODAY seems extraordinarily long and arduous!

Hopefully TODAY’s topic will shed some understanding light from the Word for those who might be dealing with one such person.

As always, the answers and hope we need are found in Scripture.

May grace and shalom be yours in full measure, as you come to a full knowledge of God and Yeshua our Lord.  God’s power has given us everything we need for life and godliness, through our knowing the One who called us to his own glory and goodness. ~ 2 Peter 1:2-3

According to this Divine Word, there are really only TWO WAYS TO SUFFER:

Cain, David and Jonah are examples of someone suffering outside the will of God through Sin.  Of course, Cain killed his brother Abel whom he had no compassion for (Genesis 4).

Jonah initially disobeyed God’s command to take the Word of ADONAI to the Ninevites; and also had more compassion for a dumb ol’ plant than he had for an entire Nation’s salvation (after the whale had eventually persuaded him to obey God’s Word –  Jonah 1:3, 4:1-9).

David committed adultery with Bathsheba and possessed an obvious lack of compassion for her husband Uriah the Hittite (2 Samuel 11) in sending him to his sure death on the front lines of war.

Let none of you suffer for being a murderer or a thief or an evildoer or a meddler in other people’s affairs. ~ 1 Peter 4:15

So, that much we may have figured out.  SIN with its lack of compassion for others is the obvious thief of our joy and peace.

But, what about the compassionate Servant who obeys, trusts and does the will of the Father?  Why on God’s green earth must he suffer a seemingly purposeless depression while walking in obedience?

But if anyone suffers for being Messianic, let him not be ashamed; but let him bring glory to God by the way he bears this name. 17 For the time has come for the judgment to begin. It begins with the household of God; and if it starts with us, what will the outcome be for those who are disobeying God’s Good News? 18 “If the righteous is barely delivered, where will the ungodly and sinful end up?” 19 So let those who are suffering according to God’s will entrust themselves to a faithful Creator by continuing to do what is good.~ 1 Peter 4:16-19

Let’s consider two instances (Job and Peter) of suffering inside the will of God through Sifting, though there are more!

ADONAI asked the Adversary (Satan), “Did you notice my servant Iyov (Job), that there’s no one like him on earth, a blameless and upright man who fears God and shuns evil?” ~ Job 1:8 (CJB)

Then the Adversary (Satan) went out from the presence of ADONAI and struck Iyov (Job) down with horrible infected sores from the sole of his foot to the crown of his head. ~ Job 2:7 (CJB)

And the Lord said, Simon, Simon, behold, Satan hath desired to have you, that he may sift you as wheat:  But I have prayed for thee, that thy faith fail not: and when thou art converted, strengthen thy brethren. ~ Luke 22:31,32 (KJV)

Did you notice that in both of these instances the Adversary was in the very Presence of the Most High and needed His permission to afflict (sift) the Servant of the LORD?

Sifting defined…’To put (flour, for example) through a sieve or other straining device in order to separate the fine from the coarse particles.’

I chose the King James Version of Luke 22 above because it gives the true rendering of the passage, which rather than ‘repentance’ (‘to feel sorrow’ as some versions translate); ‘convert’ or ‘turn or look back to’ is the better translation.  In essence, Yeshua is saying:

‘Satan (is acting like Satan and) desires to have you…BUT I have prayed for you!  And because I have prayed for you, your TRUST will not cease to be…but through that very suffering that is in accordance with My will…when I have given back your strength, you will LOOK TO ME AGAIN…then likewise, you shall pass on that same HOPEFUL strength to your brothers!  Because what the enemy has meant for evil, BEHOLD, I have MEANT it for good!’ (Genesis 50:20)

Yes, surprising to some, the Adversary himself is a servant of El Elyon, The Most High God!

For those suffering outside of God’s Will, I plead with you that ‘In Christ, there is no condemnation; but when He has given revelation, it must be acted upon for your soon-to-be transformation.’  Comprende?  Repentance, then, is your Gateway to Divine Favor and Blessing!

And what about those helplessly watching a suffering decreed by ADONAI Himself?  What kind of practical ways might they offer help to the afflicted?

Compassion + Prayer with the understanding that ADONAI is working in their lives to bring about eventual good!

These two, Compassion + Prayer, will usher in Divine Help for their loved one.  Enchained, Paul professed that ‘the prayers of the Saints PLUS The Spirit’s aid would bring about his deliverance.’

‘I know that this will work out for my deliverance, because of your prayers and the support I get from the Spirit of Yeshua the Messiah.’ ~ Philippians 1:18b,19 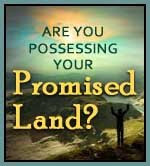 My Precious Friend, has your suffering come by sin or by sifting?

While one type of suffering is needless and fruitless, the other type is necessary and fruitful!

You are to remember everything of the way in which ADONAI led you these forty years in the desert, humbling and testing you in order to know what was in your heart – whether you would obey his mitzvot or not. 3 He humbled you, allowing you to become hungry, and then fed you with man, which neither you nor your ancestors had ever known, to make you understand that a person does not live on food alone but on everything that comes from the mouth of ADONAI. … For ADONAI your God is bringing you into a good land, …So you will eat and be satisfied, and you will bless ADONAI your God for the good land he has given you.

A Good Land…that is where you’re headed.

The one suffering INSIDE of God’s Will has the following to look forward to as you persevere by His Spirit with confidence that YESHUA is praying for you in your momentary affliction!

Persevere Saints!  Persevere in the good works HE has laid before you, and soon shall you reap a bountiful harvest with cries of joy at His immeasurable FAITHFULNESS at having not only remembered you, but not wasted your pain!

HE has not forgotten you!  HE is taking you to Your Promised Land!